I have previously posted some of the “raw data” on Six Weeks of Windows Azure but I wanted to also share some thoughts about “how it went” and “how we might do things differently” in the form of a mini retrospective.

Our budget was £0. Given that, we achieved a heck of a lot 🙂

30 sessions and 2 streams (technical and commercial) delivered by a combination of Microsoft, Partners and Early Adopters allowed us to get through a lot of material. With that comes:

But overall we are very happy with how it worked out. Feedback has been universally positive – 95% would recommend to a colleague or another company.

The weekly one hour surgery allowed companies to ask questions and get answers. We felt these went extremely well given we had not tried this format before.

The week 4 labs were an untried format for us. 12 companies came in over the 5 days (max of 3 companies on each day). The use of the day varied enormously from reviewing architecture through to migrating code and databases to the cloud. All the companies found the lab time extremely useful.

We easily got to over 500 individuals registered, primarily through publicising through blogs, twitter, email.

Our primary audience was UK partners although we didn’t turn away any organisation. We had over 90% partner sign up and vast majority were UK based.

What could be improved?

90% of the companies were doing .NET. Which is fantastic … but Windows Azure is great for OSS as well. We would have loved to have seen more none .NET companies joining us.

Vast majority of the attendees were technical – yet we had a great set of commercial sessions. Our advertising just didn’t reach the commercial folks.

Was at times very frustrating – mainly around audio dropping/failing to connect for speakers. We would consider Lync or even 3rd party solutions for a future delivery.

We tried but didn’t get product team involvement. However I think it would be much easier to do so in the future.

Some technologies (e.g. SQL Azure Federations, Windows Azure Connect or HPC on Windows Azure) were not covered until very late in the 6 weeks. I think we could do a better job of demonstrating the rich breadth of Windows Azure in Week one whilst we also have the most attendees.

What still puzzles us?

No shows in Week One

We had 190 people join us in Week One out of over 500 registrations.  Many of these “missing 300” never went on to join us live but presumably some did watch the recordings. However it puzzles us why they never showed.

We wanted to take companies on a journey with detail and depth, hopefully leading to clear plans for when and how they would adopt Windows Azure. But… by week 4 we had significant drop off in numbers despite extremely good feedback on the first three weeks of sessions.

Based on the above we would likely tweak a future delivery as follows:

Maximise the Week One experience – target hundreds of individuals and organisations

The kick start event would signpost to a “month of Windows Azure” no closer than 2 weeks away. 4 weeks vs 6 is a good compromise

Simplify the commitment from two days to one day

We spread our 5 sessions per week over two days. Instead we would concentrate everything into one afternoon with signposting to further detail on each topic. We would retain surgeries.

The most committed could then subsequently join us in labs to unblock/validate. Rather than embedding these into the six weeks we would scheduled them for much later

A potential timeline would therefore be:

We did run some of these tweaks by our companies who made it to week 6.

I will shortly do a mini-retrospective. 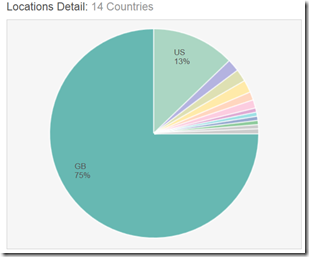 59% building a mix of applications 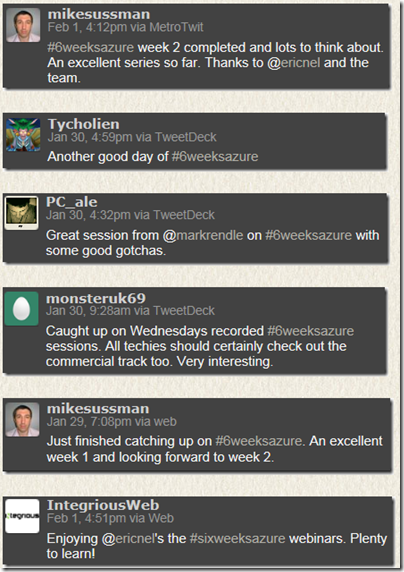 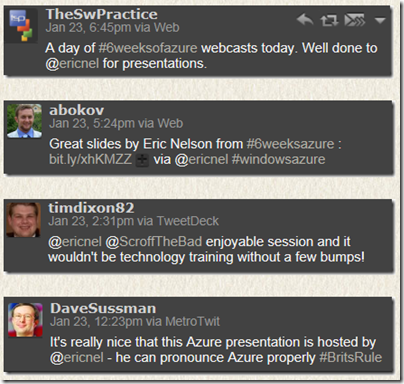 Steve has pulled together a gentle stroll through DNS, CNAME records and multiple web sites and how they all related to Windows Azure. This was in response to frequent questions we had on this area during Six Weeks of Windows Azure.

Steve and his pen

Which is a great use of an extra day in February 🙂

I have Thursday 1st set aside to get this all sweetly installed – perfect timing as Six Weeks of Windows Azure will have ended and I can safely think about rebuilding my pc.

And I will be most definitely install Team Foundation Server Express – FREE for individuals and teams of up to 5 users! Oh and yes… Visual Studio Express gets TFS integration. Sweet.

One of the companies on www.sixweeksofazure.co.uk asked us about the specifics of deploying into a single web role two solutions – one built in PHP and one built in ASP.NET.

Brian created a great post in response to the customers question. Thanks Brian. 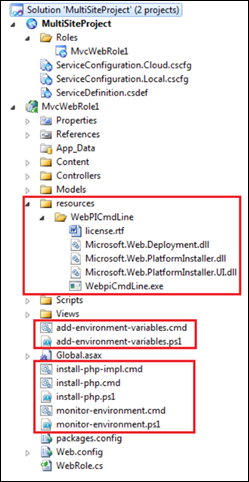 Head over to www.sixweeksofazure.co.uk and click on Week 1 and Week 2 to get details.

It is not too late to join us – there is after all still 4 more weeks to go and we have recordings of the first two weeks.

Note: This is primarily targeting UK companies – but we do not turn anyone away 🙂

What others have said (none are my relatives…):

Feedburner
These postings are provided "AS IS" with no warranties, and confer no rights.